Marine salvage is not a new matter for Thailand, but in the long history of Thai law Thailand has neither ratified any international convention on salvage, nor enacted a domestic law to govern marine salvage. Until this year, the Bill on Marine Salvage was passed and came into effect on 31 October 2007. The Act comprises of 34 Sections. This is part of the developments of Thai maritime law.

Basically, the Act is influenced by the International Convention on Salvage 1989. The purpose of enacting the Act is to establish the common practice of salvage and at the same time, to set the rights, obligations and liabilities of each party involved in marine salvage in line with the international convention. One of the crucial principles of the Act is to encourage marine salvage operations and ensure that adequate incentives are available to persons who undertake salvage operations in respect of vessels and other property in danger. Since the Salvage Convention 1989 was used by the draftsmen as the model of the Act, it is not surprised to note that most of the main principles of the Act are in line with the proviso of the Convention. Nevertheless, those main issues of the Act are summarized here below: 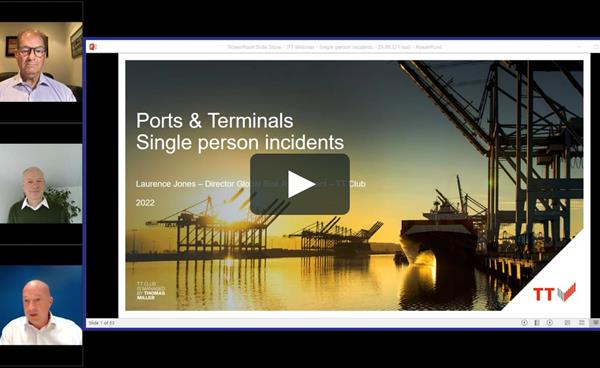 TT Club's Loss Prevention team is pleased to have run a webinar discussion around single person incidents including slips, trips and falls.