While most directly involved in the freight supply chain will have an awareness of the principles of General Average, they might struggle to explain them to customers. TT’s latest StopLoss briefing, produced in collaboration with FIATA and the Global Shippers Forum, provides a straightforward summary of the topic, along with essential good practice advice.

General Average (GA) is a global legal principle of maritime law under which all interested parties to a ‘maritime adventure’ proportionally share any losses or expenses resulting from a voluntary and intentional act on the part of the ship or cargo in order to save the remainder in an emergency. The concept of ‘maritime adventure’ sounds quaint but describes the total group of stakeholders involved in the voyage.

Typically, GA losses are not high frequency, but have in recent years resulted in greater impact to beneficial cargo owners (BCO) and freight forwarders, in part because container ships have continued to increase in size. Hundreds of years ago, a cargo ship might have had 20 interested parties on board, today on the largest container ships; there could easily be tens of thousands of interested parties aboard a single ship.

GA is the system whereby a party to the adventure (most often the ship owner) can recover the extraordinary expenses/sacrifices that are necessarily incurred following some maritime incident, in protecting the cargo and/or preserving the ship. The parties who would typically contribute in a GA loss would be; the ship owner, the beneficial owner of the cargo on board, the owners of any bunkers and stores aboard the ship and finally the owner of the containers and carrying equipment on board all in proportion to their values. 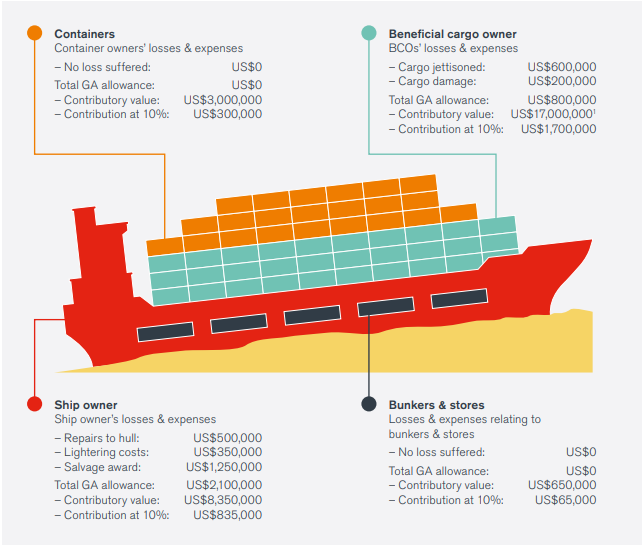 Recognising that GA losses are each having a greater impact (due to increased container ship capacity), coupled with a lack of understanding of the processes involved, TT Club has published a new StopLoss guidance document titled ‘Demystifying General Average’. The StopLoss aims to outline the process in a logical chronological order. It provides a transparent review of the concept of GA, what it is, the purpose it serves, which parties are impacted and how.

a transparent review of the concept of GA, what it is, the purpose it serves, which parties are impacted and how

Because GA losses are infrequent, a freight forwarder or BCO might never have to deal with one of these cases. The process is complex and, where cargo insurance is not in place, can be expensive for the BCO. If the concept and processes are not well understood, it could come as quite a surprise when a request for security is made.

The concept of security

In practice, the first that the BCO, freight forwarder or NVOC might learn of a GA event may often be the request for security from the General Average adjuster. The request for payment or a guarantee may cause confusion.

In order to ensure that payment will be received, the adjuster requires each party interested in the voyage to provide a GA bond as security. Since this is done at the outset, before the full value of the loss is known, the adjuster will necessarily estimate. A GA bond is a promise to pay whatever contribution will later be assessed by the adjuster, backed up by a GA guarantee from a bank or insurance company. Alongside this, the General Average adjuster will request landed values of carrying equipment, and bills of lading and commercial invoices detailing CIF values for cargo in order to work out the contributions for all interested parties.

Ordinarily, where BCO interests are concerned, the General Average adjuster will identify the interested parties through a review of the bills of lading issued by the carriers. The global supply chain, however, is complex and it is not uncommon for an initial request to be made to a freight forwarder or NVOC in error. In such circumstances, the freight forwarder or NVOC should pass the demand immediately to their customer.

The process can become problematic for a BCO who does not have cargo insurance in place. It is estimated that over 50% of consignments are transported through the global supply chain without cargo insurance. Standard marine cargo insurance policies cover the costs associated with GA losses. In the event of a GA loss, the cargo insurer will typically take over the process for the BCO, ensuring that the required securities are placed and that the cargo will be released at destination.

Where cargo insurance is not in place, it falls to the BCO to respond to the request and provide sufficient security. In such circumstances, the BCO should not ignore the request; it is prudent to act quickly to resolve the matter and arrange security. Failure to do so will result in the cargo being held from release at the destination port, with the risk that a lien is held over the cargo to satisfy the due costs.

Where cargo insurance is not in place, it falls to the BCO to respond to the request and provide sufficient security

While infrequent, the risk of GA losses should not be overlooked. It is prudent to ensure that cargo insurance is in place – the costs following a GA can be significant. The final General Average demand in a recent case exceeded 60% of contributory values.

Armed with this latest StopLoss guidance document, whether you are a BCO, a freight forwarder or NVOC, you will have a clear understanding of the process, your general responsibilities, clarity as to the requests being made of you and the repercussions should the process not be followed.

Read more about the risks associated with the use of Lithium-ion batteries, a topic with emerging concerns throughout the global supply chain.