Although the introduction of the ISPS Code was driven primarily by the need to counter the threat of terrorist attacks on ports and shipping, it and its regulatory cousins CSI (Container Security Initiative) and C-TPAT (Customs-Trade Partnership Against Terrorism) are having a positive impact on levels of more traditional cargo crime.

So said TT Club's Andrew Kemp, addressing a recent conference in Asia on the topic of "terminal security - cost or investment". Far from complaining about the cost of participation in the various security programmes, Mr Kemp suggested that shippers and port facility operators should appreciate the many benefits of improved supply chain security and contended that the programmes originally conceived as anti-terrorist measures are, in fact, helping to tackle an existing crime problem that ports in the past had been able to ignore.

"Before 9/11, the price of security, in terms of both financial cost and perhaps a loss of operational efficiency, was justified by the decrease in the potential for theft," said Mr Kemp. "In other words, there was a point - lying somewhere between the theft of a box of paper clips and the theft of a container - where the terminal operator should begin to be concerned."

However after the devastating 2001 attacks in the US, the risk of terrorism and the potential of the maritime transport system as a target or a vehicle for future attacks has spurred progress in developing internationally agreed security measures and remedying the historic lack of insurance coverage against terrorist acts.

Mr Kemp observed, though, that despite insurance industry-government initiatives such as the US Terrorism Risk Insurance Act, under which the federal government shares the risk of loss with the insurance industry but mandates that coverage be provided, the situation in other parts of the world remained patchy. "Some insurers of terminal operators in the Asia region are willing to provide terrorism cover but others are not," he said.

Pointing out that the cost of implementing new security systems and complying with the ISPS Code was not only prudent expenditure but also necessary, Mr Kemp noted that non-compliance for either terminal operators or shipowners was "not likely to be a profitable venture".

Repeating warnings given by the TT Club last year, he issued a reminder that insurance cover may be voided by a marine insurer for failure by a terminal operator or shipowner to comply with the ISPS Code. "Under the law applicable to marine insurance, breach of an express warranty, such as a failure to comply with national or international regulations for example, could give the insurer the possibility of rejecting a claim that has resulted directly from a failure to comply with the ISPS Code.," Mr Kemp said.

Mr Kemp stressed however that operators should recognise the trade benefits of many of the anti-terrorism measures that are unrelated to their original purpose. He pointed to reduced delays, increased safety (less unauthorized people within the terminal), faster processing times, better asset control, decreased payroll (due to IT improvements), fewer losses due to theft and therefore, possible decreased insurance costs.

He also stated that, in TT Club's experience, most security processes are allied to quality management programs which will have a very positive spin off in terms of liability exposures or at least their defence.

In addition, Mr Kemp revealed that TT Club has seen a reduction in the number of theft claims being reported since the ISPS Code was introduced in July 2004. Although it was still too early for any formal statistics definitively linking the ISPS Code with a reduction in cargo crime, Mr Kemp observed that "the security of a laden container is only as good as the procedure in place at locations it passes through. Improvements such as the ISPS Code, while focusing on the terrorist issue, must provide a securer internal environment for port facilities, which is likely to cause criminals to move their activities away from these locations." 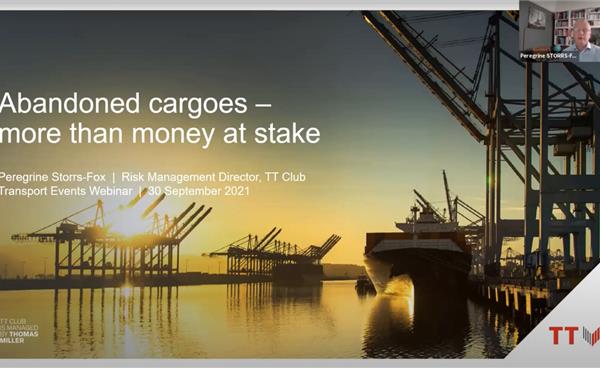 As the world's leading transport and logistics insurer, TT Club offer valuable insights into the future risks that ports face, from climate to technology to human error, and how ports of all sizes can benefit from a safe transition into a decarbonised and digitised future